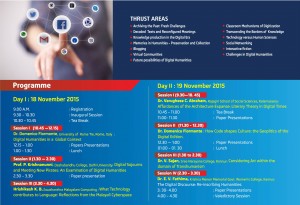 I arrived in India one week ago, and the terrifying Paris news reached me on the 14th morning. The physical distance instead of mitigating the shock has somewhat amplified my emotional response. God knows if what we insist to call the “West” will survive to another Sept 11. Democracy, freedom, tolerance, equality: these are the real targets of these attacks.

I have been in Nepal for one month before coming to India, and that experience had a profound impact on me both as a human being and a scholar. More than 9,000 people died in last April earthquake and I went there following the Centro Studi Platone, an NPO that has been working on educational projects in India and Nepal since 1999. It is probably by a Nepali friend that I got one of the most convincing statement on the Paris massacre: “I don’t understand how people can be so Demon hearted”. Yes, our Demons unleashed…

In this grey mood it was not easy to start a DH seminar in Kerala. Some of you have probably seen the programme of the event organized by Maharaja’s college in Ernakulam. Local organizers will soon put some more info online, including presentations and abstracts. Overall, it was an incredible experience. Maharaja’s college it is a magnificent one century old building. Tagore call it the “Cambridge of the South”, and in fact its architecture reflects its glorious (aesthetically speaking) colonial heritage. 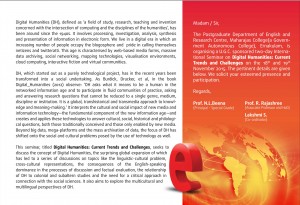 The Kerala colleagues were wonderful, their hospitality unmatchable, and they were all enthusiastic and excited about digital humanities research and teaching. Most of the about thirty presenters were young graduate students in their mid-twenties. I’m not a prophet, but I expect soon a big DH movement coming out of India. The contribution of India to the present world economy is well known, and the recent visit of Prime Minister Narendra Modi to UK was an opportunity for Indian media to reaffirm it: “India is the only country that has the potential to change the world in the 2020s in the way that China changed it in the 2000s”.

What is much less acknowledged in the West is how the potential of Indian immense cultural heritage could change in the future the scenario of digital humanities and its relative tools, resources and research methodologies. But as pointed out by the article linked above, there are still many barriers and gaps to be resolved, and the digital infrastructure is one among them.

On the second day of the seminar there was a power cut – an event relatively frequent in India – and we were moved to another room equipped with a power generator. So everybody was able to show the slides, but it was not possible to access the web. Imagine what it could have happened in a western setting: panic and hysteria among presenters, disappointed audience, ashamed organizers, etc. Instead, everybody was calm and helpful, nobody complained or make organizers feel miserable, and the conference went on and actually respected the tight schedule…

So in these days I’ve experienced in corpore vili the limits of the digital and the virtues of human touch: in fact, the limits of the taken-for-granted western life model based on, for example, the total dependence on electricity. Obvious observations, but try for a moment to assume this kind of scenario and the impact it will have on our everyday [working] habits.

In these dark days, it is not enough to speak about the need for critical (digital) humanities. You’ve got to experience it. Let’s unplug for few hours a day our personal digital devices and social media profiles, let’s live without computers in our offices and safe water in our houses. Let’s get really Southern hemisphere once in a while. As Viola Padovani – the friend who founded in 1999 the NPO mentioned above – would say, it is only through applied compassion that we will help to make the world a better place.

I think that if we refuse to consciously acknowledge these basic issues we will fail to address the multicultural and diversity issues we all care for, and DH instead of helping to resolve problems will widen the global cultural and social divide.