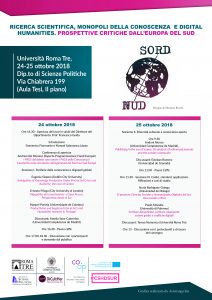 As part of International Open Access Week, on Wednesday October 24 and Thursday October 25 an international and interdisciplinary meeting dedicated to the digital humanities and the hegemonies of scientific knowledge will be held at Roma Tre University, Rome, Italy. The title of the event is Ricerca scientifica, monopoli della conoscenza e Digital Humanities. Prospettive critiche dall’Europa del Sud (“Research, Monopolies of Knowledge and the Digital Humanities: Critical Perspectives from Southern Europe”).

The goal of the conference is to turn around the pejorative “PIIGS” label (used to refer to Portugal, Ireland, Italy, Greece and Spain) and introduce a view from the South on the geopolitics of digital knowledge: the issues around open access, Anglophone hegemony in journal publishing, exorbitant costs of subscriptions for libraries, research assessment systems, etc. We thought it was important to interrogate this label from socio-anthropological and postcolonial perspectives in order to take it as a starting point of resistance to the policies that are destroying Europe as a whole.

The term “PIIGS” first appeared in 2009 in The Economist referring to the economies of Southern Europe. Our aim is to discuss how Mediterranean countries have uncritically and silently accepted the rules of the Global North regarding the production and dissemination of academic and scientific knowledge. We will reflect on how knowledge monopolies in science are manipulating the production of knowledge not only in the Global South, but also in relatively less marginal cultures and languages (including PIIGS countries: by the way, for an alternative narrative of the story we recommend  to watch at least the first five minutes of this documentary!).

¿Are we then the Digital Humanities’ PIIGS’? This is the question that a group of digital humanists, sociologists, philosophers, historians and economists will address in this event (see the abstracts of the talks).

This event has been organised with the support of the  “Community as Opportunity-Creative archives and users network” (Creative Europe-Culture Sub-programme 2014-2020) project, led by Manuel Salamanca López (UCM) and the Department of Political Science at Roma Tre University (Domenico Fiormonte).

The event is free and will be live streamed via
http://streaming.uniroma3.it/ and https://ww.youtube.com/channel/UCPtgISuy061980fGS63VWiA.